– On 7 and 8 may,Vladimir Lungu will participate in the “Opera Days” four day celebration of the art of opera in Istanbul -European Capital of Culture 2010. He will make his debut with Istanbul State Opera conducting the world premiere of “Çelebi” in concert version, composed between 1942-45 by Cemal Reşit Rey and unearthed in 2006 by his Aydın Karlıbel, who reworked the missing orchestral parts of the four-act opera for its premiere. 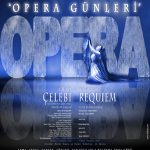 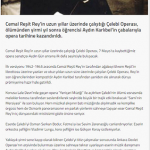